It still remains to be seen what the ultimate consequences of the steroid excesses in baseball will be. There are the obvious effects when guys like Pudge get smaller overnight and guys like Jason Giambi no longer put up the same numbers. And in fact, an early result seems to be a bit of an overall downward trend in ballplayer size these days, with smaller guys like Pedroia winning awards and huge contracts. The NY Times, in its continuing series “Why the mainstream media is barely relevant: Stating the obvious three years after the fact,” points out this very same fact.

However, there are more important questions that need to be answered and I am not satisfied with their coverage. For instance, we all know about Derek Jeter’s romantic entanglements with women like Mariah Carey and Jessica Biel. I applaud that.  But why is he now dating a 22 year old? I mean, this guy is five years older than me and I’m pretty sure if I was dating someone barely old enough to legally drink, my family and friends would wonder what was going on. Pudge may have hit the Slimfast but at least he isn’t robbing the cradle.

All I know is that it’s hard to feel bad for a guy like Jeter who is so cavalier in his profligacy. But even that is better than A-Rod with his she-males and Joba with his strippers. And it definitely beats talking about PED’s. Thank god New York has a family man like CC around now. Perhaps it will make up for the loss of the one guy who always kept things real by wearing his emotions on his shirt sleeve. Where are your tears when we really need them, Farnsworth? 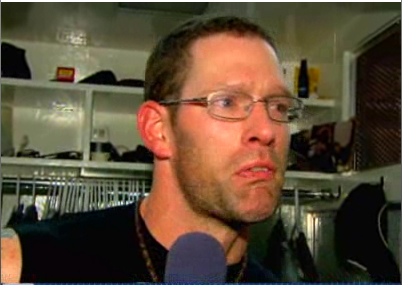