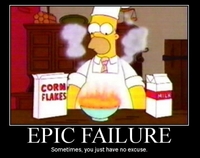 This season has been rough on quite a few teams already. However, that played itself out in a rather amusing fashion (for me at least) for two different teams in the last couple days.

We begin (as we often do when it comes to failure) in our nation’s capitol where the former Montreal Expos put on an exposition all their own the other evening. I could explain the premise of the story but I think this one quote just about sums it up: “…if there’s one thing we all can agree upon, it’s that exploding hot dog buns are high comedy indeed.” How can you top that? Well, maybe by spelling the name of your own team incorrectly on your jersey. But seriously guys, please keep it coming.

However, the farcical comedy stylings of the Washington Nationals pale in comparison to the tragi-comedy of the Chicago White Sox. Sure, they play in a mediocre division so they’re never really going to be out of it but they took a beating and a half yesterday afternoon. It all started when the Twins plated 20 runs to the Sox’ one and just when you thought it couldn’t get worse, the always eloquent Ozzie Guillen’s managed to jinx the impending Jake Peavy trade. Let me refresh your memory. Following the loss Guillen said, “I hope Peavy didn’t watch the scoreboard today. He might say no.”

Well Ozzie, you sure nailed that one. Maybe Peavy watched the scoreboard and maybe he didn’t but either way, he won’t be suiting up in Chicago pinstripes anytime soon.

So that’s where we stand as May slowly draws to a close. But don’t worry, the Nationals are still out there and it’s only a matter of time before they manage to outdo themseleves once again. My guess? Teddy Roosevelt gets decapitated in the President’s Race on Kid’s Day at the ballpark. Once again ladies and gentlemen, your 2009 Washington Nationals!

Credits:
–Thanks to SLK for the link to the Nats story.