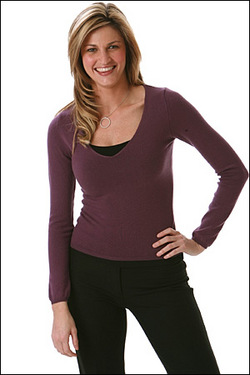 Make one declaration to the worldwide interwebosphere about how you’re going to do everything in your power to land a date with the most beautiful woman in sports broadcasting and suddenly you’re considered a creepazoid stalker who could use a lesson or two in social tact.

I made my intentions very clear; and I’m pretty sure I was a perfect gentleman.  It’s 2009, y’all, and the internets is where it’s at.  I mean, you can do everything on this crazy series of tubes: order takeout, save money on your car insurance, get Twitter-blocked by Barry Zito.  Why should chasing Erin Andrews be any different?

“But, Jeff,” my mother said, “what if your girlfriend reads this?”

“My girlfriend does not read this blog, Mom.”

Boy, was I wrong.

I tried to play down my actions of sneaking around my girlfriend’s back to get a real shot at Ms. Andrews, but she wasn’t as understanding as I had hoped.  At least now she knows; and I am happy to report that she hasn’t broken up with me over this so things are working out pretty well.  I mean, let’s face it, a couple of cigarette burns to the chest are well worth her allowing me to continue on with my special project.

Still, there is just one small problem: Erin Andrews is a lot more mobile than I.  And, well, ESPN hasn’t helped me with passing on my messages (sweet as they all are).

What Fulbright Scholar would let such foibles deter him from accomplishing his task?

Indeed, I have a plan.  You see, I bought tickets to the 2009 All-Star Game in St. Louis.  I’ll be there for all the fan festivities: old-timers game, home-run derby, futures game — four days of pure debauchery — and a possible encounter with Ms. Andrews herself… that is, as long as Joba Chamberlain doesn’t get in my way (but who would make him an All-Star this year anyway?).