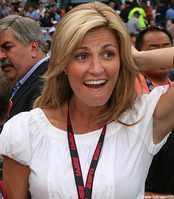 We almost lost another one on Wednesday night. While people were busy mourning the death of Michael, Erin almost slipped away. But more importantly, with her would have slipped away Jeff’s chances of ever getting his date with Erin Andrews. See, this is the weekend when it all happens. This is the weekend when Jeff, if he manages to stay sober and focused, will finally make good on a quest he was given by god. Well, a god of the MLBlogosphere, at least.

And that chance was almost taken away. I just hope that this event serves as a reminder to my friend that he must take nothing for granted while….questing. Times change and if we don’t adjust, we lose out. For instance, my friend likes to remind me of how the final out of the 2006 World Series involved Brandon Inge swinging wildly outside of the strike zone. But now that same man is representing the American League and Detroit in his first All-Star appearance.

Perhaps we will see a similar change in Jeff this weekend as he stop swinging wildly and finally embraces the porn-stache over which he waxed so eloquently the other day. Perhaps this testosterone fueled accoutrement could provide the same luck for him that it showered on Keith Hernandez.

Or perhaps this weekend will be just one more of those odd “what just happened” events where we try to forget all about it and hope to god that no one ever brings it up over dinner.

The choice rests in one man’s hands. So tell us Mr. Lung, what will it be? Are you Keith Hernandez or are you the woman with a squirrel between her breasts? The world needs to know.