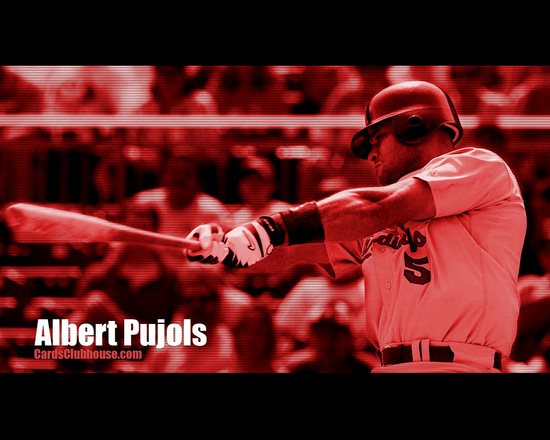 Albert Pujols has played just nine Major League seasons and in each and every one of them he’s hit over 30 homeruns, collected more than 100 RBI and batted over .300.  Those aren’t just good numbers, folks.  Those are astronomical numbers.

And this is his best year yet.

I think it’s time we stop referring to Albert Pujols as the future Hall of Famer that he is — because let’s face it, if the man’s career ends today he’ll be a first ballot lock* — and start acknowledging that he is indeed one of the greatest players to ever play the game, all-time, in the history of the game. 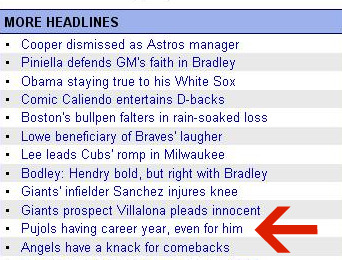 Can we just stop and think about that for a minute?

In our present game, today, right this second, we are witnessing a rare and genuine paragon of baseball supremacy.

And Albert will trump them both.

By a long shot.

I know it’s hard to understand while it’s happening.  I realize that, in most cases, we do not realize what great feats we are witnessing firsthand until it’s too late, until our heroes are lifted in the 7th for defensive replacements, until they’re embarking on sappy, over-produced farewell tours.

But right now we all have the opportunity to savor the greatness, to take it all in, to let it move us.

There are many beautiful women: Erin Andrews, Heidi Derosa, Allison Stokke… but none of them are Marilyn Monroe.

Great presidents abound in Franklin D. Roosevelt and George Washington; but there is only one Abraham Lincoln.

Sure, Metallica is great and all but there’s only one Pink Floyd.

And yes.  There is only one Albert Pujols.

*As one reader pointed out, a player needs 10 years in the Majors before being eligible; consider my phrase a simple bout of hyperbole