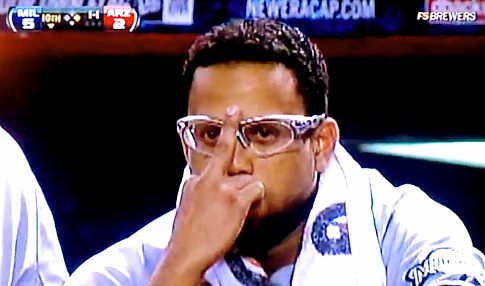 Earlier this week, when asked about his role as set-up man to John Axford on a playoff-bound Brewers club, the manic and pock-marked hot head had this to say:

“There’s been plenty of save opportunities, and I’ve pitched once in the ninth inning and it wasn’t a save. I’m not happy. That’s the bottom line for me.”

You see, dear readers, K-Rod is what we nowadays call a “stat-whore” — an obvious “save” chaser, a child more concerned about his “legacy” than the overall well-being of his team.  And apparently, winning means nothing to him.  Being successful means nothing to him.  If it did, he’d keep his mouth shut.  Instead, he’s yapping about how rough he has it while presumably yearning for a return to that moribund, going-nowhere New York Mets club.

Will it ever end?  Probably not.  But being aware is being alive, which is good news for you and me.

And K-Rod?  Well, he is just another one of the walking dead.

PS.  Aside from being a big baby, K-Rod is also the poster child against extreme, high definition close-ups.  I mean, seriously, there is no reason for a grown man to have that much acne.  Unless…