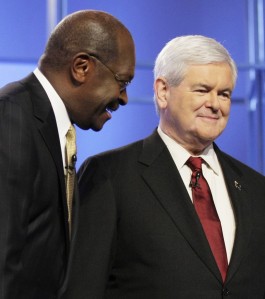 In a stunning turn of events, Herman Cain will not be the next President of the United States.  In other news, snorting pixie sticks will not get you high.  The one thing that these two items have in common is that a lot of people should have seen it coming before trying it out.

So now it’s Gingrich.  Oh right, and Romney.  It’s like the longest and most asinine game of musical chairs ever.  The only problem is that instead of removing a chair each time, they just substitute a person and make them keep playing.  Please, can we just make it stop and give Romney the nomination?  I know you don’t like him and I know you are afraid the Mormons are going to steal your children but there’s something to be said for having a candidate who’s actually qualified to run.  What’s next, Palin redux?

The real issue is that the Republicans are so adverse to nominating Romney that they treat every new challenger like how MLB treats Kyle Farnsworth.  “Well, we didn’t like him before and he hasn’t really done much but he sure looks good on paper.  Eh, what the hell.  Let’s give him a shot.”  And, just like the Republican challengers, you find yourself wondering a month or two later what you possibly could have been thinking.  And, of course, like any circle of abuse, you convince yourself that you’ll never let it happen again…

…At least not until next year when you’re looking for a middle reliever (presidential candidate) and notice that Farnsworth (Gingrich) is on the market….