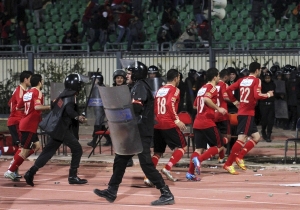 A year ago the southern edge of the Mediterranean lit up with a rainbow of revolutions.  Tunisia, Libya and Egypt all rose up while even quiet countries like Morocco had to deal with protesters in the streets.  A year later, with real elections taking place across the region, it seemed like things might have finally settled down.  But after what happened in Egypt on Wednesday, maybe not so much.

Violence is a part of sports.  Even baseball, which tends more toward craft than collision, has its share of physical play.  I’m sure no one has quite forgotten the sickening crunch when Buster Posey went down last season.  Despite the uproar after the play, though, few people would deny that it was fair.  Unfortunate, yes, but fair.