For the first time EVER in RSBS Podcast history, Jeff, Allen and Johanna all meet IN THE SAME ROOM!  That’s right, no phone lines, no Skype, just a microphone and three unfettered opinions overlapping and slip-slapping without pause.  Among the topics of discussion are the Tigers, the Cardinals (it’s PLAYOFFS, duh!), an Ozzie Guillen-less Chicago, “blowing” it down the stretch, why you should see Catching Hell and much, much more!

*Special thanks to our PodMaster Keith Carmack. Follow Keith on on Twitter and, if you like spontaneous awesomeness, check out his crew and their gut busting Undercast!

The Pittsburgh Pirates managed to lose a game the other day to a local
community college. Granted, it wasn’t their best players on the field
that day but they did still lose to a community college. Now, we’ve
spent a lot of time talking about the highlights we expect to see in
the upcoming season but what are some of the bloopers and sob stories
you are looking forward to as well? 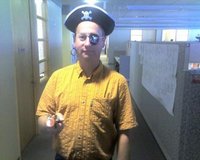 The Pirates’ saving grace (after losing to a community college) is the fact that they themselves are a team better suited for the community college circuit.  Boasting players most of us have never heard of like Nyjer Morgan, Brandon Moss and Ross Ohlendorf, is it any surprise that the perennial underachieving Buccos start the season picked to win a mind-blowing 65 games?  I think not.

But as my sludge-dredging colleague, Mr. Krause, so coyly alludes to, this will be just one of the many “sob stories” we baseball fans are looking forward to in 2009.  Now I am no soothsayer; nor am I blessed with magical powers allowing me to predict which gaffes and gripes will take centerstage this season; but let’s face it: some things are just a given.  For example:

The Orioles and Blue Jays Will Simply Disappear
If they haven’t already, by the time we hit the month of May, I foresee that all relevance of baseball in Baltimore and Toronto will cease to exist.  After a steady diet of Yankees, Red Sox and Rays is slammed down our throats, who will care that Brian Roberts is a shining star in a sea of apathy or that J.P. Ricciardi is single-handedly destroying what was once a proud baseball organization?  No one.  That’s who.

Cub Fans Will Be Whining About Something
They always do.  They always will.  They never stop.  Whether it’s invoking the spirit of Cub castaway Steve Bartman, repeating ye ole circa 2003 mantra: “Prior and Wood, Prior and Wood, Prior and Wood” or just getting too drunk to know what’s actually going on during the game, Cub fans were born to lose.  And in personifying their joyous moniker of “Lovable Losers”, they love to whine.  Sure.  They’ll win the division.  How can they not?  But they’ll find a way to blow it in the playoffs and we sane baseball folk will be subjected to yet another lengthy offseason of wouldas, couldas and shouldas — a century old Northside tradition.

Gary Sheffield Will Say Something Stupid
Happens every year, folks.  He might even box someone too, that is, if he can find the strength to walk from homeplate all the way out to the mound.  And if he plays in more than 114 games, there’s a good chance that he’ll add even more guts and gore to that Phillies/Mets rivalry we’ve all come to enjoy over the last few years.  Sheff is certainly setup to give new meaning to the phrase “choke artist”.  All Cole Hamels has to do is open his mouth.

Joba Chamberlain Will Try His Luck with Erin Andrews — Again — and Fail Miserably — Again
I know, I know.  Ms. Andrews said it was nothing, but we saw the video (which has conveniently been erased from the entire interweb) and let’s face it: Joba struck out like Adam Dunn after an all-night bender.  Having been in that situation myself, and being a guy, I think it’s safe to say Joba will go there again.  Men are stupid.  Ladies, am I right?

Yet looking into my crystal ball, dear readers, the one blooping gaffe that is bound to come up again and again this season is almost too easy to call:

Kyle Farnsworth Will Be the Laughingstock of Major League Baseball
They hated him in Chicago.  They hated him in New York.  They hated him in Detroit.  If the Royals had any fans, they would hate him in Kansas City too.  But at the end of the day, no one can deny that Farnsy has become the whipping boy of baseball sadists all across US America.  When a kind-hearted She-Fan openly in love with her beloved Yankees rips the man to death in her best-selling book, it is safe to say that Kyle Farnsworth is and always will be fair game.  He should’ve known better: “There’s no crying in baseball!”

I asked a similar question in the hypothetical earlier this season but now that some aspects of the postseason have sorted themselves out, I have to ask again. What makes you more sad, the Cubs winning the NL Central or the Cards not making the playoffs? 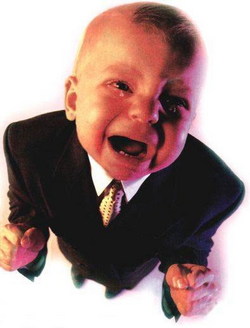 For all of you who picture me sitting in the alcove of my apartment drowning in the proverbial sea of my own tears because the Cardinals will be home this post-season while the Cubs journey on, you’re probably not too far off from reality.  Of course, the half empty bottle of Jack, the lonely cavern of my heart and the clear and present danger of having one Sarah Palin next in line to the highest office in the land most certainly have more to do with my wallowing than the current state of baseball.

As I have said here before, the Cubs were supposed to win the Central and be one of the best teams in baseball this year.  So why, Mr. Krause, should I be so surprised to actually see this come true?  We’re both highly educated, extremely learned, dashingly handsome young men, so cut me a little slack here.

Verily, the true river of tears has yet to flow.  In fact, it is on standby until the final outcome of the AL Central battle.  If my neighborhood Sox find a way to wiggle back in there, then all will be well again and I will have much to look forward to.

If the menacing Twins manage to squeak in (which would realistically only extend their inevitable fate of just not being good enough) then I will go ahead and cry… right along side Mr. Krause, who again, finds himself rooting for the worst team money can buy.

Crying is nothing new to baseball fans.  The likes of Bill Buckner, Bartman and Don Denkinger — among myriad others — have long tortured the hearts and souls of those most loyal.

And no one will cry harder (or longer) than Mets fans if the the second team of New York blows it — yet again — at the very last minute.  Stay tuned… or, just keep your ears open for the hisses and boos from the Met faithful.  That ricketty old stadium may come tumbling down sooner — and in a more creative way — than we all think.

Hey hey, everybody!  The kings of pain, the Chicago Cubs, have gone and done it again.  In one single day the organization was able to provide me with enough fodder to dissect for the rest of the season.  But I can’t stretch it out because that wouldn’t be fun, so let’s get to it!

Or shall I say: LETS get to it as in LETS PLAY TWO… as scribed on the new Ernie Banks statue unveiled outside Wrigley Field yesterday.  Smart people will notice that the apostrophe is missing from “Let’s” in Banks’ most memorable catchphrase.  So who was doing the proofreading for this monument?  Aramis Ramirez would be my first guess.  Who needs apostrophes when you’re pitting rooster against rooster in a violent cockfighting duel to the death?  Fukudome maybe?  I so sorry.  Is prorry can being dis one.  Something tells me his English isn’t so great.

But to read the Chicago Tribune, you’d think Kosuke Fukudome was the second coming of Christ.  He’s everywhere!  So what, he has a great opening day.  Good for him.  But can rational human beings really tout him as an MVP candidate after one single game in the Majors?  According to the Trib, he was quiet in spring training camp because he was busy working on a SECRET WEAPON.  Oooh… secret weapon… like what?  An aluminum bat… bionic arm… non-detectable PED injections?  In the print version of the Trib article, the actual title is “Secret Weapon Unleashed”.  Again, the extremely biased Tribune didn’t realize how third-grade that sounded until after it had gone to print and I called them twenty times to complain (blame Editor Ramirez), so they very smoothly (or not so much) changed the headline for the online version.  Of course, if you read the article (why would you?) you will realize that they never actually say what the secret weapon is other than: he hit the ball hard.  Look, Fukudome didn’t become a star in Japan for not hitting the ball hard.   Isn’t there something more substantial that could be written in the newspaper?

Like Chicago’s relentless search-and-destroy mission for the infamous Bartman.  It took 4 and a half years, but Moises Alou finally came out and said “I WOULDN”T HAVE CAUGHT IT ANYWAY.”  Nah, you don’t say?  I think it has been extremely clear to everyone in the world who has eyesight that this is and always has been the case.  And besides, it wasn’t that play that forced the Cubs to lose that series; it was their shoddy defense, lack of clutch pitching and a curse of a goat that got ’em.  Poor Bartman did what any other baseball fan would’ve done with a foul ball coming right at him.  It makes me sick that Alou is getting good press about coming clean; he should have said something when it actually mattered — when the guy was getting death threats from Wrigleyville drunkards and had to start living underground.

But this isn’t the most ridiculous Chicago Cub story of the day, no, that would go to telling Chicagoland readers that the missing link to a Cubs championship season is groundskeeper ROGER BOSSARD.  According to Tribune writer Paul Sullivan:

“Five of the last seven World Series champions played on fields that Bossard either constructed or remade: the 2004 and ’07 Red Sox, the ’01 Diamondbacks, the ’06 Cardinals and the ’05 White Sox.

If Bossard’s magic touch works again, the Cubs will be dancing on their new field come October.”

Right.  Forget about hitting, or pitching, or the game in general.  Just resurface the field so it drains better and you got yourself a World Series ring.  Brilliant.