Last year, RSBS gave you a guide to surviving the zombie apocalypse.  Sure, maybe it hasn’t happened yet but you’re welcome nonetheless.

The problem is, we forgot to include a survival guide for overcoming the undead already among us.  No, I’m not talking about Dick Cheney or anyone else with a pacemaker.  I’m talking about something much, much scarier.  Hippies.

We all know people who just don’t understand when it’s time to give up or time to go.  Names that come to mind immediately include such luminaries as Jamie Moyer, Brett Favre and Roger Clemens.  But what about the hippies?  Seriously, these guys have been going at it since the 60’s at least.  If you want to lump the Beats in there with them, you’re going back even further.  C’mon man, pot and patchouli are cool but at some point you have to give it a rest.

Now, there’s no denying that the hippies have given us some wonderful things.  There’s no way that VW could have stayed afloat long enough to give us the new Beetle if it wasn’t for the hippies buying up all the VW vans.  And where would we be without tie-dye?  I’d be missing at least one shirt, that’s for sure.

But at some point you have to accept that your revolution has reached it’s natural end and move on to something new.  For instance, try on some skinny jeans and an ironic t-shirt and join the hipster movement.  At least the name is similar.  That’s helpful when you’re working with less than a full contingent of brain cells.

Here’s the thing, the anti-hippie revolution is already underway and if Malaysia has put their foot down, other civilized countries can’t be far behind.  The bell has tolled, hippies.  Time to wake up.  Jerry Garcia is gone, Timothy Leary is dead (I think) and pot is almost legal.  Hm, now that I think about it, maybe we should be writing a guide on helping hippies reintegrate instead of marginalizing them further……..Nah.  Stupid hippies.

Jeff and Johanna break out the hot stove holiday eggnog (topped off with a couple gallons of that special Kentucky blend, of course) and discuss all things important to the baseball-politico world, including but not limited to: adult circumcision, the 1960 World Series, the Phillies’ impending rape of the National League, peeing on your hands a la Moises Alou to get a better grip and much, much more… all to make you forget with a smile the horrors of your latest office party!

*Special thanks to our PodMaster Keith Carmack.  You can experience Keith’s wicked podcast and subsequent film projects at Undercard Films.  The man is talented, people.  You don’t want to miss out, so go check it!

Jeff, Allen and Johanna vehemently compare and critique Croc-based lifestyles, which (surprisingly) include but are not limited to the many labels of Josh Hamilton (including those who are scantily clad), Derek Jeter’s inner Pete Rose, Jeff’s go-to-Gehrig impression, Ozzie Guillen’s mess-mouth and much, much more… all so you can at least laugh while you waste some valuable time!!! Go ahead, laugh it up, fuzzball!

*Special thanks to our PodMaster Keith Carmack.  Keith is involved in some impressive projects himself.  Check out his work at  Undercard Films.  Seriously.  Do it.  Or I’ll have Prince Fielder sit on your face.

In the pantheon of sporting goats, none has a more hallowed place than the guy who brings the season to an end.  Sometimes it’s a team effort (the 2009 Detroit Tigers along with the 2007 and 2008 Mets come to mind) but sometimes a single man takes that entire burden onto his shoulders and says, “Yes, I can and will end this season for myself, my teammates and the fans.”  Brett Favre is just such a man.

Being a fan of a team in the NFC North, Favre has been a thorn in my side for years now.  I was more than happy to see him leave the Packers and I wished him nothing but ill when he made his return to the barren wasteland of the North.  However, it warmed my soul to see him end this season the same way he ended the last couple: throwing an interception.  He is the career leader after all.  It’s only fitting.

I guess the only important question left now is not will he come back….again, but rather, would you call him the Bill Buckner or the Brad Lidge of NFL football?  Me, I’m going with Lidge. 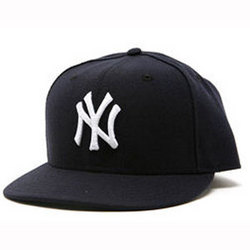 As I tend to be regarding to the great game of baseball, when it comes to hip-hop, I remain firmly in the purist camp.

This is exactly why I didn’t want to like Jay-Z’s new album, The Blueprint 3.  As the resident Brett Favre of the rap game, Jay-Z has taunted us with his multiple “retirements”, all along gradually stepping away from his street-centric roots and engaging in the bling-bling-I-got-hoes-money-and-fame garbage that has destroyed my ability to find any entertainment value in modern hip-hop.

But Alicia Keys sucked me; and as much as I hate to admit it: Empire State of Mind is a killer track.

Still, there is one Jay-Z line that makes me cringe with disgust:

Ever heard of a fella by the name of Babe Ruth?  How about DiMaggio?  Gehrig?  Mantle?  Mattingly?  Jeter?

I know Jay-Z is a lot like me in that sometimes he says dumb s*** just to say it, to see what kind of reaction he gets, to be relevant, to stir up trouble.

But even I have limitations… and dissing some of the greatest players to ever play the game is certainly among them.

Shame on you, Jay-Z.

And unless you can find a way to put Alicia Keys on every song you ever do from now until the end of time, you won’t be getting my money ever again.

As human beings, it is really easy to get sidetracked.

Like the other day when I got mixed up in a drinking contest with two Irishmen and a professional female bodybuilder from Greece when I should’ve been at home paying my bills.  I paid for it.  Literally and figuratively.

Or like our president, who, under pressure, danced off to Europe championing an Olympic bid that was as busted as Octo Mom’s fallopian tubes (fellow Chicagoans, we know we couldn’t have pulled it off) while he should’ve been here dealing with the health care debate war.  Chicago lost.  And we US Americans are nowhere even close to having a functional proposal on the table.

And now, instead of watching a one-game playoff between the equally doomed Detroit Tigers and Minnesota Twins tonight at the Metrodome, we have to wait until Brett Favre makes his highly touted debut against his former team.

Well, okay, so not all interruptions are created equally (y’feel me, Kanye?).

Personally, I welcome this NFL intrusion because, let’s face it: neither the Twins nor the Tigers are going to make much of an impact in the playoffs (believe that!) anyway; and, more importantly, nothing brings me more satisfaction than knowing my misanthropic and oft blasphemous colleague, Mr. Allen Krause, has one more idle day of sweatin’ and shakin’ and spittin’ himself silly knowing that it’s win or go home for his beloved Tigers.

I’m guessing it will be ‘go home’.

(*Image courtesy of “anonymous” on the interwebs; I just found it on a message board with no source listed though I’m sure one exists somewhere)

In what seemed to be just another routine trip of posturing down the runway Sunday evening, Miss USA Crystle Stewart and her subsequent fall (both figurative and literal) at the Miss Universe competition has become more than just a physical mishap.  In fact, this unfortunate slip has become the ultimate iconic representation of the current state of our nation and the hardworking US Americans who inhabit it.

In the last 24 hours, we have witnessed seasoned veteran journalist John McLaughlin resort to the ridiculous stereotyping of a pre-civil rights era nation, the strong-arming acquisition of an American staple by an elitist foreign entity that relies on the cowardly tactics of threats and foreboding reminiscent of one A. Hitler and the possibility that we US Americans may be watching Brett Favre throw a football wearing a helmet that doesn’t have “G” on it.

If all this has you down, dear reader, and all you want to do is sit back, relax and watch the Home Run Derby tonight, let me remind you that it is not the Home Run Derby — it is the STATE FARM Home Run Derby and you will be bombarded with a bazillion commercials over two hours urging you to buy insurance for when the big bad Iranians try to blow us up.

Is nothing sacred anymore?

Will the there be a ban on apple pie?

Will Red Sox Nation run out of things to complain about?

Will the Cubs win a World Series?

I would try to go somewhere, take a vacation, forget about it all… but with Chicagoland gas prices hovering around $4.35 a gallon, I can’t afford it.

So I think I’ll just go to sleep.  And while I do, I’d appreciate it if you don’t hate me ‘cuz I’m right.