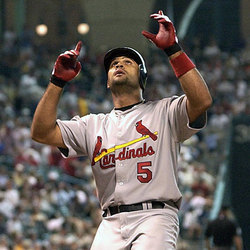 Tony LaRussa may have been snubbed by the baseball writers when doling out awards, but the only man who could possibly turn me into a homosexual certainly wasn’t.

That’s right, dear readers, Albert Pujols is the National League MVP — again — and most deservedly, as this is the A.P. whom the critics said wouldn’t make it through 2008 without having season-ending surgery.  This is the A.P. who, without much protection, rarely saw good pitches — ever.  This is the A.P. who was forced to bear the enormous weight of a subpar bullpen with a penchant for blowing big leads late and an organization run by a pompous penny-pinching pariah pleasantly pleased with mediocrity.

While I am ecstatic for my man-crush’s crowning achievement, the nihilist in me cannot stop seeing this as yet another detrimental development in John Mozeliak’s quiet quest to do nothing in the way of spending dollars to put together a true contender in 2009.

But what do I know?

I certainly didn’t know that Nate McLouth had any business getting MVP votes, but some writer (most probably a pissed off Pittsburghian with a propensity for pot-smoking) thought it’d be a funny afterthought to include him in the big picture.

I found it… um… awkward.

Speaking of awkward, never before have I seen two grown men sit down together with such unease as I did today when the president-elect met with Sen. McCain for what appeared to be a publicity stunt meant to mend the dissonance between the two camps.  Sure.  Sounds good.  But McCain had to go and bring up what is quickly becoming known as the Annhilation of the Bears, which immediately put Obama (and subsequently me) in a very, very uncomfortable place.  I was sorta hoping that Barack would have had the good sense to remind the senator from Arizona about Dennis Green’s post-game meltdown a couple years ago after that torrid Monday Night game in which we all found out:

Well, the Bears still are who we thought they were: not good enough; but you didn’t have to go and bring it up, John McCain.  You see, I thought this meeting was supposed to be about healing and planning and bipartisanship.  But since you decided it wasn’t, how ’bout those ’08 Diamondbacks?

Regardless, I’m not going to let another Republican rain on my parade of good feelings abound.

Albert Pujols — the most fascinating man in sports — is the NL MVP.