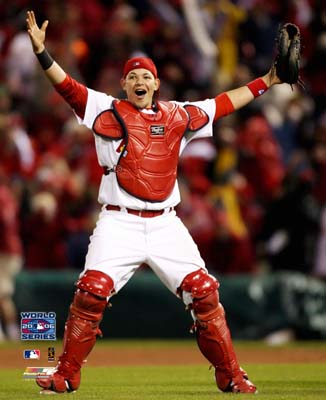 When it comes to my favorite holidays there is, of course, April Fool’s Day, National Cleavage Day and My Bent and Oft Hoodwinked Colleague Gets PWNED by a Commenter Day.

But nothing — I repeat: NO-THING beats Opening Day.

To celebrate, I give you DRUNK Rick Sutcliffe:

Now, if we could just get a Play Tennis In Your Underwear Day.

We’re baaaaaaaaaaaaaack!  Did ya miss us?  Of course you did!!!

It’s all good, dear readers, because it’s a NEW year with NEW goals and NEW impossibilities just WAITING to be made possible.  So shake off that nasty hangover, nevermind that public health clinic visit you’re gonna have to make after who you took home last night and rejoice from atop the world!

Of course, if you’re a Cardinals fan like me, you can also rejoice from the top of the baseball world (that’s the only one that matters by the way) knowing that you can walk around with your chest sticking out for at least another 10 months or so.  During our short break, I realized that finding a quick rebound lover would help me forget the unequivocal pain brought on by the loss of one Albert Pujols.  Enter: CARLOS BELTRAN.

From Cardinal killer to Met scapegoat to hot stove spice, Mr. Beltran slips inside an already potent lineup for the repeat hunting 2012 squad.  In fact, by getting Waino back and projecting a one through five order of Furcal, Beltran, Berkman, Holliday and Freese, I can’t help but git jiggy with the disco lights pulsating in my bathroom (don’t ask).

And as if that wasn’t enough excitement to start the new year, how about the fact that my fellow US Americans in Iowa seem to be ready for real change to our corporate-petting-taxpayer-blood-sucking government!?!?  FINALLY, Dr. Paul is getting some love from voters, which has forced the left-leaning media to start several Bachmann-esque smear campaigns.  This is what happens when the financially elite (who run the political machine) get worried about seeing their empire crumble.

But don’t worry.  Dr. Paul will bring them down.  Enough with the wars.   Enough with corporate greed.  Enough with buying things we can’t afford and wasting BILLIONS on pointless endeavors like the war on drugs.  It’s time to start over and that means no more empty Obama promises from the left and no more delusion-pandering from the right.

Ahh yes.  Pondering such possibilities make me feel just like I did watching D. Freese gork one over Nellie Cruz’s head.

This is gonna be one helluva year.

Continuing with the end-of-year holiday tradition here at RSBS, it’s time to separate myself from my imaginary girlfriend (NSFW) and ask the interns to lock my office door so I can get down to the meaty reflection of what was the RSBS year 2011.  Additionally, I must begin the sad, fiery purge of Albert Pujols memorabilia.  For those of you who went to public schools, you know that maintaining a fire within a small, confined room may cause ill-fated side effects, so before I start to look like Bert the chimney sweep, let me get to it…

First of all, no year would be a good year without you, the dear RSBS reader.  THANK YOU, for your readership.  THANK YOU for your emails, your tweets, your comments, Facebook shares and FingerTagging!  And THANK YOU for continuing to make writing about the baseball-politico world a treat for us every single day.

Like my riveting and oft rousing colleague, Mr. Krause, I too have been very impressed with our special correspondents.  For me, nothing says sweet Miggy-I-Love-You quite like Mark Piebenga’s His Game Is Like Waves.  It presented Miguel Cabrera in a new light — that of teacher, and, considering how much Mark has taught me about what life should be about, I continue to find its lesson fitting (and helpful!).

And though I often refer to Mr. Johanna Mahmud as “the man who introduced me to the glories of the Deftones” and “the guy who schooled me on the NBA and proved why I should be madly in love with Derek Rose”, I still have room to refer to him as “the guy who writes Setting the Mahmud“!  Dude puts the “tit” in titillating with every piece.  The last article he wrote was inspiring, if only because he found a way to get a naked Yu Darvish, an ugly sweater wearing Matt Damon and a crying Paula Deen all in one place; but, like Al, I have to admit that there’s real brilliance in his Theo-fied Arthurisms.  Still, I’m a sucker for equating dead people to the performances of Adam Dunn and Miguel Tejada.  Good work, good sir. 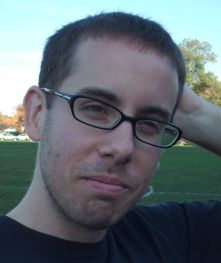 Meanwhile, no year-end applause would be complete without a nod to my longtime friend and confidant, Mr. Allen Krause.  Known for his cynical twists on the political establishment and undying love of all things Detroit Tigers, it has been a pleasure to write on his wing.  Sometimes he’s so “on” that he finds literary genius in imagery.  Indeed, that endearing Krausian wit is often highlighted by rational thought.  Sometimes it points out the un-fact-checked obvious, other times it gets serious, with a real call for responsibility.  And, just in case you think Mr. Krause’s Libertarian-bashing makes him a soulless, automated Obamatron, this reflective piece will convince you otherwise.

But when it comes to knockin’ ’em outta the interwebs park, I have to kowtow to the RSBS Presents series.  The brainchild of Mr. Krause, RSBS Presents has enlightened us on the finer points of fandom and how to stay classy while reminding us that, ultimately, positivity has upside during times of turmoil.  But the best of them all was learning how to score a Republican.  And here I thought it involved finding Jesus and quoting Alex P. Keaton. 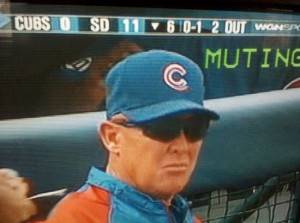 As the enemy begins yet another chapter in its century-long battle against awful, I can’t help but reflect on the one-and-done tenure of Mr. Mike Quade.  I will not question the hearty baseball acumen of the man; he’s been around this long, so he must know something.  But a leader of men he is not.

For me, his ascendancy of idiocy became relevant when his unruly, wild and uncontainable club donned t-shirts at Wrigley during batting practice that said “F**k the Goat” in big red letters across the back.  When later asked about the “goat”, Quade said he had never even heard of the curse of the billy goat, that to him, it was just a restaurant.

I was never able to determine whether his supreme stupidity was a) that he really hadn’t heard of it or b) that he had, and he was just stupid enough to think we would actually believe him.

I’m not saying leaders of men need to know everything there is to know about anything and everything, but they certainly do need to surround themselves with people who are informed on myriad subjects, and they must also have enough tact to know when they’re stepping into a great big pile of nast.

So if the sexual harassment charges against Herman Cain and his playfully flippant response to them haven’t deterred you from considering him as a presidential candidate, hopefully this video will:

This cannot happen, people.  This man cannot be seriously considered for the presidency.  The Republicans are in deep shizz.  And they know it.  It’s just too bad that the answer to their problems is right there, continuously ignored, continuously shut out.

It makes me very, very sad.

Libertarianism is the view that each person has the right to live his life in any way he chooses so long as he respects the equal rights of others. Libertarians defend each person’s right to life, liberty, and property — rights that people have naturally, before governments are created.
— David Boaz

That’s right, dear readers.  For fear of becoming the political philosophy version of Mike Quade — a bumbling, stumbling, titan of passivism — I hereby do OFFICIALLY shed my clamorous cloak of association with the Democratic Party and declare my NEW allegiance to…

The throng and its swarm of enforcers can kiss my @$$!

That’s right.  I’m sick of the two-party volleyball match of blame whilst doing nothing to solve the problems.  I’m tired of the false hope and broken (read: improbable) promises of the status quo.  I will no longer tolerate the pompous stuffed statists sucking up 30% of my income… and, for what?  To put my country in debt by the trillions?  To send my brothers and sisters off to die in TWO wars that we shouldn’t even be fighting?  No, sir.  I won’t propagate that.

So I’ve filled up on David Boaz, drunk my fill of Bastiat and now I’m ready to party like it’s 1831, y’all!

Recall how earlier in the week, while dissecting the train wreck of options present during the most recent Republican debate,  I alluded to the fact that, indeed, despite all the loony tunes, there is another candidate I am willing to support.  Well, you can bet yer sweet @$$ that man’s name is DR. RON PAUL, and that though he is thrown in with the evangelical pandering GOP, he is about as far from a “Republican” as a modern liberty-driven truthfinder can be.

He is my man going forward towards 2012 and beyond.

My friends, it is time for us to take back our liberties from the corporate thumbsucking suits in Washington disguised as our “representatives”.  Let’s get out of Iraq.  Let’s get out of Afghanistan.  Let’s shut down the fed, pay our bills and STOP KILLING THE MIDDLE CLASS.

We Libertarians would be honored if you join us.