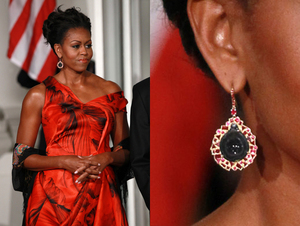 Man, what a start to the new year.  Health care gets repealed in the House, Tunisia throws out its president and Michelle Obama lights up a state dinner.  January isn’t even over yet.  What next?  Aliens landing in the Kremlin?  Pujols sporting a big Detroit “D”?

Even if ET and his homeboys do show up at Lenin’s tomb, though, I’m not sure it could be any more amazing than a series of events that took place right here in our own fair country.  Sit back and let your mind wander (and wonder) as we take a trip to beautiful Ocala, FL.

In 2005, the St. Louis Cardinals called up a 27 year-old lifetime minor leauger to get his first hacks at the big league level.  That man’s name was John Rodriguez.

Don’t remember him?  No worries.  Most people don’t.

Mr. Rodriguez came on pretty strong during his brief glimpse of the Majors, hitting .295 with 5 HRs and 24 RBI in 149 at-bats.  The folks in St. Louis liked him and his cinderella story so much that someone decided to grace Mr. Rodriguez with the nickname: J-Rod (a la A-Rod, K-Rod, YourMom-Rod, et al).

J-Rod *ahem* wasn’t a fan of the name.  Why?  Maybe because he wasn’t A-Rod!  To be honest, he wasn’t anywhere close to being an A-Rod type player.  His greatest downfall was was being born with the same easily nicknameable name as poster boy Alex while also having a first initial that contained just one syllable (you see, W-Rod would never work).

Flash forward to December 7th, 2009 and my trusty misanthrope of a colleague, Mr. Allen Krause, deigns us with the phonetically challenged nickname “Pla-Po” for his beloved (and now long gone from Detroit) Placido Polanco.

Pla-Po?  Are you kidding me?  How is that even pronounced?  PLAY-Poh?  Plah-POH?  Ah, forget it; all I know is that it sucks.

So, please know, Mr. Krause, that from now on we are calling for a complete ban on poorly constructed nicknames, specifically on those you created.  For those of you dear readers unaware, the following Krausian nicknames shall no longer be used, under any circumstances, lest you wish the worst on the baseball-politico community:

And of course, let us not forget to mention the ongoing ban against one of the crappiest nicknames of all time, also penned by Mr. Krause, for his dilapidated Mo-Town Tigers team:

‘Cuz unless finishing the AL Central in second place qualifies you as a ‘winner’, then this just needs to stop.

Wherever the Chicago White Sox fan-in-chief goes, you can be sure that some part of the American polity will find a reason to complain. And so it has been over the past couple weeks as President Obama visited England for the G-20 summit and then headed to Trinidad and Tobago for a sit-down with his Latin American counterparts.

The funny part about these dust-ups with certain personalities, though, is that they have little or nothing to do with the President’s actual policies and everything to do with his actions. Actions, I might add, that were very open to interpretation.

First, we had the apparent broach of royal protocol when Michelle Obama put her arm around the queen. But is it really a faux pas when the queen is the first to break with tradition and put her arm around our First Lady? I’m going to have to go with a big fat no on that one.

And then some people called foul on what looked like a bow as the President approached King Abdullah of Saudi Arabia. Was it a bow? Possibly. Probably. Does it matter? No. In fact, I don’t really think it’s such a bad thing if we show a little respect to our “special” partner of the past 50 years. There’s a reason we pay less than three dollars for a gallon of gas and the rest of the world pays over five.

And speaking of gas, the event that really has the punditocracy up in arms and ready to revolt was a handshake between Obama and Hugo Chavez of Venezuela. Yep. A handshake. Imagine that. He actually attempts some sort of rapprochement with one of our top oil producing partners, a country with whom relations have been very strained lately, and the response is derision and cries of treason from the chattering class.

Seriously, I think the only thing worse than being President would be managing a baseball team. Can you imagine being Joe Girardi as your team gives up 14 runs in one inning? Or Manny Acta every day of the season? How about Grady Little after you left Pedro in the game in the 8th? Nope, none of that sounds like fun to me.

In fact, he only way it would even kind of be worth it to have such a high profile position is if you could just go a little crazy with it. Like Mark Cuban. Or Isiah Thomas. Or how about the President of Iran? You have to be someone special to make Mel Gibson seem sane by comparison. But even he has his problems. Don’t tell anyone, though. It’s a secret!

If you are one to eschew the daily fear mongering and perpetual bad news infecting our world today, then I highly recommend you avoid reading the Chicago Tribune first thing in the morning.  Unfortunately, for me, the Tribune has become that thing I love to hate.  My self-inflicted aggravation is just one of the many results.

But today, I came across a titillating article by Stacy St. Clair which boasted and celebrated the harmony, the togetherness, the complete reciprocal adoration between Barack and Michelle Obama — our nation’s first couple.  Reading it made me feel good.

As the day went on, news broke of Alex Rodriguez — our collective fallen hero — and his stunning confession of guilt regarding his usage of banned performance enhancing drugs in 2003.  The image of Rodriguez discussing the issue with Peter Gammons flickered on my computer screen.  I was overwhelmed with sadness.

My thoughts immediately went back to the Obama article and I couldn’t help but ask myself: Is anything what it seems anymore? 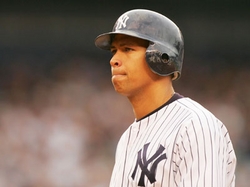 Alex Rodriguez put on a great front.  Despite Jose Canseco’s self-righteous smear campaign and associated agenda, I never once questioned Rodriguez’s proclaimed innocence.  At no time did I suspect Rodriguez to be tainted in even the slightest of ways, for A-Rod was our hero.  He was the one targeted with pulling us out of the steroid era forever.  He was the one endowed with replacing Bonds as the all-time homerun king.  He was the one who seemed like the most talented, most gifted, most touted ballplayer I have ever witnessed play the game.

What you see is not always what you get.

The Wizard of Oz seemed like an all-powerful wizard.

And it turns out they were all just… like… us:

Venerable MLBlogocrat and de facto Dear Leader, Mark Newman, announced yesterday that Red State Blue State sits atop the 2008 MLBlogosphere as the number one fan blog in the… well… in the entire universe.  With that, I’d like to say that Kanye West is full of crap.

It ain’t lonely at the top.

Because this honor would not have been possible without you, Dear Readers.  Ravenously hungry for the special RSBS blend of baseball and politics only available through the uncensored blabberings of me and my colleague, the oft jaded Mr. Allen Krause, we humbly tip our hats to you for making this dream a reality.

In lieu of this special occasion, I, personally, would like to take a moment and sincerely thank each and every one of you in the MLBlogosphere: the bloggers, the commentors, the administrators, the techie nerds behind the curtain and of course MLB.com.

Any regular RSBS patron knows that our unique brand of blasphemy and argumentative analysis would simply not be possible without all of the above.

Mom — for birthing me and everything else 😉
The St. Louis Cardinals — for giving me a reason to live every spring
The Chicago Whitesox — for being in my neighborhood and luring me in with Connie’s pizza
Dad — for teaching me that I didn’t have to become a Major Leaguer to be successful (though it would’ve certainly helped)
The Chicago Cubs — for dreaming the impossible dream and providing blog fodder galore
Barack Obama — for convincing people that “Yes, We Can”
2007 Ms. Teen South Carolina — for being my US American muse
The Prince of New York — for being my must-read blog of the day, every day
Allison Stokke — for being hot

Mr. Allen Krause — for being a dear friend willing to take my hyperbolic haymakers and verbal vanquishings without being too much of a baby about it.

But you don’t have to worry about us… we’re just a couple of twelve-year olds trapped in thirty-year old bodies who don’t have the know-how to wield power or even consider being corrupt.

And when you really think about it, isn’t that enough? 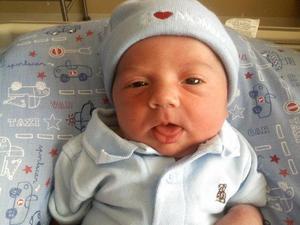 Whoo wee!  The Democratic National Convention is in full stride!  How about that Michelle Obama speech!?!  Smart lady; but she didn’t say anything I (a card carrying Dem) hadn’t already heard, so I’m going to skip the commentary all together (just for today) and get right to what’s going on:

Again, yes, my sisters are having kids like crazy.  But let me tell you, dear readers, this child’s birth has much more at stake than usual.  Depending on how you look at it, the impact of my young nephew’s entry into the world is paramount.  You see, Caleb Ryan (that’s his name) is the son of my sister (a devout Cardinal fan) and my brother-in-law (a die hard Cub fan).  Indeed, Caleb Ryan’s fandom future is of the utmost concern.

If he is to be a Cubs fan, he will offend his mother (not to mention me and the rest of our big, bad, Cardinal family).

Caleb’s choice will not be easy.  An entire genetic line awaits his decision.  And so I cringe at what I feel is already the inevitable.

For his father is a Cubs fan and the father has the most influence in this decision, right?

My sister, though devoted in her Cardinal Nation following, still probably couldn’t name anyone on the team except Albert Pujols (because he’s Pujols) and Adam Wainwright (because according to her, he’s “super cute”).

On the other hand, my brother-in-law is a force of baseball trivia — a man who knows the game (and his team) inside and out — one who probably would never allow the birds-on-the-bat to be displayed across his young son’s chest.

After much consideration, I have come to the conclusion that I am, at last, okay with that.  Because if my sister and her husband have proven anything during their four year marriage, it is that their relationship is the ultimate paragon of compromise: they give and take, stretch and lean, move in tandem up-and-down and side-to-side, always staying in tune with one another through thick and thin (and any other cheesy cliche you can think of).  To put it in perspective, folks, their license plate reads: CUBNLS.

For this, they have my highest respect.  So too does their child: Caleb Ryan.

As you can see, this kid is so cute that even if he decides he’d rather root for the Northsiders regardless of how sick it might make me, he will always have my heart.

And that, dear readers, until the end of time will always be worth more than any game, any city, any rivalry — ever.

I know it’s asking a lot of my new nephew, but I sure hope he doesn’t hate me… at least not ‘cuz I’m right.