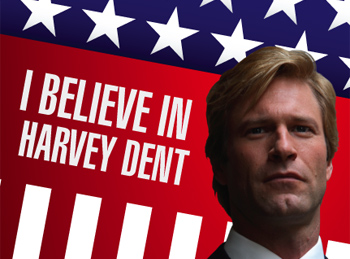 My favorite movie of the year so far is “The Dark Knight.” I could wax rhapsodic about this movie for hours (and have) because it encompasses the tension, debate and ambivalence swirling in the atmosphere surrounding the United States these days. However, the one quote from the movie that really stuck with me is when Harvey Dent says, “You either die a hero or you live long enough to see yourself become the villain.” The funny thing is that this sentiment is just as true in baseball as it is in Gotham City’s political arena.

This season saw the return of Jim Edmonds to the Midwest but probably not in the colors people expected him to wear. And I’m sure the Cardinals faithful, like my friend Mr. Lung, wished for a moment that he would have either retired or suffered some fate that would have kept him off the diamond as opposed to watching him run onto the field at Busch Stadium wearing Cubbie blue.

I’d bet it’s the same way Red Sox fans feel when they see a well-scrubbed Johnny Damon patrolling center field in the Bronx. Let’s be honest, the age of free-agency (and especially the Faustian machinations of Scott Boras) has not been kind to baseball fans. No sooner have you purchased your CC Sabbathia Milwaukee Brewers jersey then he’s shipping out to the east coast and the Steinbrenners’ warm embrace.

However, all this is nothing compared to the uproar if and when Manny signs with the Yankees. Yeah, he may have dogged it in Boston to secure a trade. He may have pushed around old men while he was there, too. But can you really imagine Manny in Yankee pinstripes? Even talking about it sounds kind of dirty. But that’s how it works today. One day a Cardinal, the next a Cub. Heart of the Red Sox in 2006, soul of the Yankees in 2008.

So what’s a baseball fan to do? How do you accept it when the guy who is the face of your franchise leaves for greener pastures? How do you not see the old hero you loved as the Benedict Arnold he has become? Well, it turns out that there’s one other movie franchise that reflects the world around us almost as well as Batman. And earlier this year in “Quantum of Solace” one of Mr. Bond’s associates said it best: “When one’s younger, it seems very easy to distinguish between right and
wrong. But as one gets older, it becomes more difficult… the villains
and the heroes get all mixed up.” It’s fitting that Bond would add nuance to a formerly black and white world. Still, that isn’t going to get me any money back on that Ivan Rodriguez Tigers jersey.