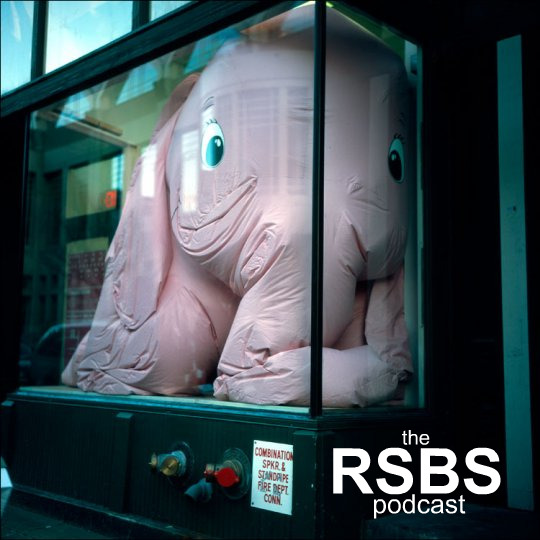 The RSBS crew celebrates its 30th episode by taking a stroll down podcast memory lane, remembering things that busted our (and hopefully your) guts.  AIDS salad and Ron Santo’s memory get rehashed while new memories (like gay ponies v. horsicorns, an iguana named Dudley and how you can cure your foot problems) are created!  Jump on board the RSBS crazy train!  No stops til you question how you spend your free time!

*Special thanks to our PodMaster Keith Carmack. Follow Keith on on Twitter for all his movie magic updates and make sure to check out his crew and their hilariousness on the Undercast! podcast.

Jeff tries his darnedest to be as polite as possible during his unfettered gloating of World Championship status (Go Cards!) while Second City’s Mark Piebenga adds some level-headed awesomeness to Johanna’s outlandishness and Allen’s seasoned straight man routine.  Among the topics of discussion are “the greatest game ever”, the woes of rebranding an already twice championed franchise (talkin’ to you, Marlins), Theo Fever in the Chi, b!tch t!ts and much, much more!

Now grab some Crown Royal and enjoy yo’ self!

*Special thanks to our PodMaster Keith Carmack. Follow Keith on on Twitter and make sure to check out his crew and their gut busting Undercast! podcast.

Jeff and Johanna (well, mostly Johanna) push the boundaries of political correctness, in that, well, they don’t see any boundaries.  At all.  Hot dog!  They also get into pretty much anything and everything, including but not limited to Miggy Cabrera’s drinky-time, Albert Pujols’ year long stranglehold on Cardinals fans, a beyond the grave interview with Ron Santo and much, much more… all to make you have happy ending!

Just like Mr. Krause on a first date, this is gonna be quick, probably painful and
will most likely include more than one embarrassing revelation: 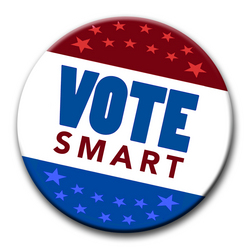 Today is election day here in the Chi.  Rahm.  Carol.  Chico.  Some other guy.  Those are your choices for mayor.  Oh… I mean, those are your Democratic party choices.  In this town, Republicans just hang out at the local deep dish joint and get fat, occasionally showing up to an event to slam a Democrat or two.  Such slams are rarely heard.  Like they say, if a tree falls…

And don’t worry.  When I showed up to vote this morning I didn’t let that pesky ghost of Ron Santo standing outside the polling center sway me.  And judging by the turnout (or lack thereof), I don’t think anyone else is voting him in either.

So, will you or won’t you, dear readers?  Will you follow my jaded and oft lugubrious colleague, Mr. Allen Krause, to the trenches of a baseball-less existence… all to stick it to a guy (assuming Bud Selig does have proper male anatomy) who doesn’t care, who isn’t listening, who won’t get it anyway?  Are you really ready to stay home and watch Maury all day instead of batting practice?  Are you prepared to sulk in the reality that is a soulless sports sanctuary that includes *cough* the NBA and NHL?  You do know that this has nothing to do with forcing change (why bring it up just now after all these years?) and everything to do with misery loves company, right?

Who else is to blame for Mr. Krause’s sudden bout of revolutionary activism?  Why it can only be his beloved man-crush Miguel Cabrera, of course!  With Miggy’s er… uh… “issues” causing alarm throughout the Tigers organization, Mr. Krause knows that his team’s season could be well over before it even starts.  And that is why he is rushing to react, to draw in troops, to overthrow the baseball world so we all lose sight of Detroit slipping below Kansas City in the win column.

Believe it.  Or don’t.  Just don’t say you weren’t warned by someone in the know.

The hot stove is so hot that we had to add more fuel to the sizzlin’ fire!  Jeff, Allen and Johanna are joined by Second City’s Mark Piebenga and Red Sox loyalist Troy Jagodowski to get down and dirty on all the offseason drama.  Discussion topics include but are not limited to: what Theo Epstein was smokin’ when he re-signed Varitek, the end of Troy Tulowitski, the continued morphing of the Hall of Fame, the A-Gon deal and much, much more… all to make you laugh that milk right through your nose!

*Special thanks to our PodMaster Keith Carmack.  You can check out Keith’s wicked podcast and his subsequent film projects at  Undercard Films.  The dude has mad skillz, so you might wanna pay attention.  Do it!  Now! 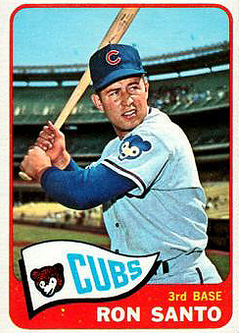 While lambasting the Chicago Cubs and their myriad follies has become as synonymous with my persona as injecting gratuitous images of beautiful women into everyday baseball-politico essays, let it be known:

I am not an animal.

Which is why I reach out and put my hand on the collective shoulders of Cubs fans everywhere who are mourning the loss of the late, great Ron Santo.

Many things can be said about Mr. Santo — some good, some bad, some somewhere in between.  But no one can deny this:

Ron Santo was the Chicago Cubs.

And no one loved them more than he.

From Cardinals Nation and the rest of the RSBS crew, we tip our caps to you, Number 10.

May you rest in peace,

The world premier… of an RSBS original…

Mauf Tauk is Jeff and Theo.

**Pass it on, folks. Let’s get the word out.  Please send this link to everyone you know. We make this thing go viral and more RSBS baseball-related hilarity will certainly flourish.**

Want more RSBS TV?  Try Crush.  Or if you prefer talking heads, check *these* out.

*Note: Kirk Gibson won the MVP in ’88, but it doesn’t rhyme and we’re cool like dat so get over it.

Still pissed off that Santa didn’t bring me the one thing I wanted most this year (a competent General Manager running the St. Louis Cardinals), I have little choice but to fully embrace the intangible magic of humility.  In doing so, I have decided to channel the tenacity of my bitterness and turn it into sincere, reflective admiration for all that has been accomplished here at RSBS this year.

Not only did we create a unique baseball-politico universe full of hyperbolic criticism and satirically erratic fandom, we also had the good fortune of being surrounded by fabulously smart and like-minded baseball nuts with passionate political views within the MLBlogosphere.

Indeed, in 2008, we saw dreams come true; we saw corruption, glory, beauty, heartbreak, Cinderella, more corruption, more beauty and more heartbreak.  We saw it.  We reported it.  We ripped it to shreds.

In honor of RSBS‘ rapturous reportage, babbling blabberings and partisan posts, I have pulled out the top three 2008 RSBS entries written by that misguided Tiger fan you have all learned to feel sorry for… the one and only Mr. Allen Krause.

Golden Parachutes — December 10, 2008
Hip, Sexy, Current… these three words don’t just sound like a hit NBC mini-series; they also describe the tone of this well-written commentary exploring the ins and outs of our ever-failing government, the ever-declining mystique of Detroit sports franchises and the ever-growing… well, fellas, you know what I’m tryin’ to say… (*Ladies, please ignore that last line 😉

…and the Winner is:

Allen’s Post-Partisan Playoff Preview — October 1, 2008
Hardly known for his loquaciousness, Mr. Krause really put it to dear readers galore with this existentialist exercise in post-modern fantasy capped off by… well… by being RIGHT.  Fine tuned to the unique political and social caricatures of our dear elected leaders, my colleague done me proud with this little ditty of a post — so much so that I… well… I peed a little from all the excitement. 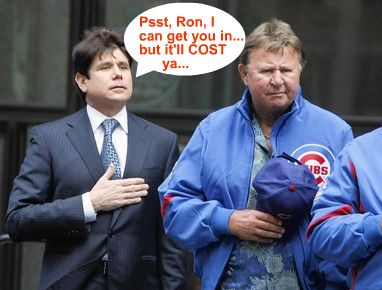 Perhaps the Veterans Committee knows something we don’t…

This is Illinois.  This is Chicago, Illinois.

And in the Second City anything is possible.

As a Chicagoan, I am expected to accept and endure the following three basic tenets of Chicago life, otherwise known as the Three C’s:

Because I love this fair second city and all the headaches associated with its underground, battled, scar-bearing character, I generally acquiesce and forego my impetus to break bones and punch walls in reaction to the ceaseless bombardment and annoying abundance of those Three C’s.

But on a day like today, when it’s 30-some degrees outside with a steady, sloppy rain pouring down… when our dear Illinois governor, Rod Blagojevich is arrested at his Northside home on federal corruption charges… when the Ron Santo camp is hogging headline space by going through its annual crybaby routine… when all three of these things converge on the same day in one unforgiving onslaught of discomfort, I am left exhausted, irked and very, very thankful that I am anti-gun.

It’s just too much for one man to take.

The weather, yeah.  Like an unwanted pregnancy, it happens.  We deal with it.

Blagojevich, yeah.  I think we all knew he was a crook.  I met him at the 95th Street/Dan Ryan Expressway CTA station on election day 2006.  He smiled, shook my hand, patted me on the shoulder.  Five minutes later, as I was left admiring the indescribable solidity of his hair, I realized my wallet was gone.

But when it comes to the Hall of Fame hopes of one Ron Santo, I have absolutely had enough.  Enough!

Likewise, when the Hall of Fame, whether it be the BBWAA, the Veterans Committee or the Baseball Gods themselves say “no” for twenty-five years, they mean “NO!!!!!… and stop bugging us.”  Because just like the yearly lament of “this is our year”, the we-were-robbed cries for Ron Santo routine is getting extremely old and intensely aggravating.

Rick Morrissey, of the now bankrupt Chicago Tribune, cried out to his drones of readers, “What don’t Hall voters see in Santo?”

They don’t see a Hall of Famer, that’s what, Rick.  If doing the same thing over and over and over again while expecting different results is insanity then the crybaby Santo camp is absolutely DERANGED!

Ron Santo was a great baseball player.  He wasn’t one of the greatest of all time but he was better than average, better than good, better than what Cub fans have turned him into over the last several years: a whiny, sore losing, crybaby.  It’s not Ron’s fault.  Leave him alone.  He’s on your side.  Quit making him look like the fat kid in gym class that no one wants on his team.

You have a stronger case with Andre Dawson so go cry about that for a few decades, will ya?  By then Blagojevich might be ready to enter a work-release program cleaning up the beaches that will surround the then island of Chicago (it’s a polar ice cap melting thing).