Sunday was my first opportunity to get to the ballpark in 2012, so I grabbed a friend, put on some summery clothes and headed to Sox Park for Jackie Robinson Day!

I’ve seen some great baseball on Jackie Robinson Days past, all of which were pitchers duels (my drug of choice), but with a Rick Porcello v. Chris Sale matchup looming, I wasn’t expecting much.  The pair would end up surprising me, but that wasn’t all:

The Yankees were in town.  My buddy Mike had sweet tickets on the 100 level.  And I was craving the sort of breeze only Adam Dunn’s wiff-n-miss bat can provide.

It didn’t take long for the game to get out of hand.  In fact, the game STARTED with something I have NEVER seen before: back-to-back bunt basehits, thanks to Brett Gardner and Derek Jeter.

In fact, Jeter went 5 for 6 in the game, only the fourth time he has ever collected five hits in one game (the third being his epic 3K performance just last month) and yes, that’s something I’ve never seen before.

I have also never seen a White Sox pitcher (Brian Bruney) enter a game, record ZERO outs, give up 2 hits and 2 earned runs and still not be the worst performer of the night.  Like my buddy Mike said: “When you put Will Ohman in in the third, it’s already a disaster.”

And, of course, nothing spells disaster like the 2011 version of Adam Dunn.

But hark!  Baseball games always offer something new; and I hadn’t been to a Sox game all season where Adam Dunn didn’t strike out at least once, BUT, lo and behold, Dunn went 1 for 4 with NO strikeouts!  Hallelujah!  Champagne for errrrrrrybody!

Dude still can’t hit an 11-run homer though.  At this moribund point, I’m thinking that might be the only thing that could save his career. 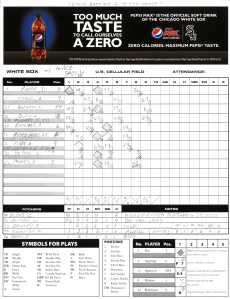 The Yanks scorecard. Notice all the black diamonds.

Some days, when I leave my office dead to the world in the evening, I have a baseball itch that the television and computer just can’t fix.  Yesterday was one of those days.  So, following the drill, I raced home, changed into more comfortable gear and headed straight for Sox Park.

My friend, Pie — a semi-regular on the RSBS Podcasts and an all around Tiger lovin’ fiend — came with me.

And boy were we in for some treats.

Not only was the weather perfect, but so was Brent Morel’s glove skills and Carlos Quentin’s stroke.  The game moved along at a nice, brisk pace… except when young Tiger hurler Andy Oliver was busy walking the bases loaded and giving up cheap runs.  But perhaps the most satisfying part of this early summer contest is that it bore three firsts, something baseball is apt to do.

For example, last night Adam Dunn got his very FIRST hit off a lefty this season!  And it was of the slow dribbler infield variety, proof that the baseball gods love extended metaphors even for big worthless(?) free agent signings!

Also, this game featured a homerun by none other than Juan Pierre!  Only his 15th career homerun in 11+ seasons, I had to ask Pie if I was dreaming when he pulled the ball up and out of deep right center as it was the very FIRST homerun I’ve ever seen Juan hit with my own eyes. 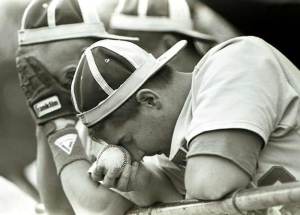 And, with the White Sox ultimately winning the game, last night presented to me the very FIRST time I’ve ever seen a disgruntled fan (my friend, Pie) take his scorecard — the same scorecard he meticulously filled out in detail during the entire game — and throw it away.

I cried.  A little.  I hate to see a good scorecard die the same death as chewed gum, empty water bottles and hot dog boxes.  But in this case, I am just filing this one away with the rest of the extended metaphors.  May they extend until they can extend no more…

White, black, awake, asleep, hungry, full… doesn’t matter… if you are a man and you have a heartbeat you exist to do one thing and one thing only:

As no exception to this eons-old rite of passion, I couldn’t stand the drought any longer, and on Wednesday night I ventured on over to my neighborhood cathedral: the ever tantalizing, the ever teasing, the ever titillating Sox Park.

I scored like no man has ever scored before.

Scorecards tell stories — great, fantastic stories that can be pieced together with digits and asterisks and squiggly lines.  Each one is unique — each scorer different from the next, yet universally similar enough to enlighten anyone else willing to read them.

When I was a kid I found scorecards from the ’60s an uncle of mine had kept.  There I was, decades later, in a dark basement in the dead of winter, recreating the majesty of Ken Boyer and Bob Gibson and Tim McCarver on a hot July afternoon… in my head.

So go ahead, take a gander… and try not to drool (click image to enlarge): 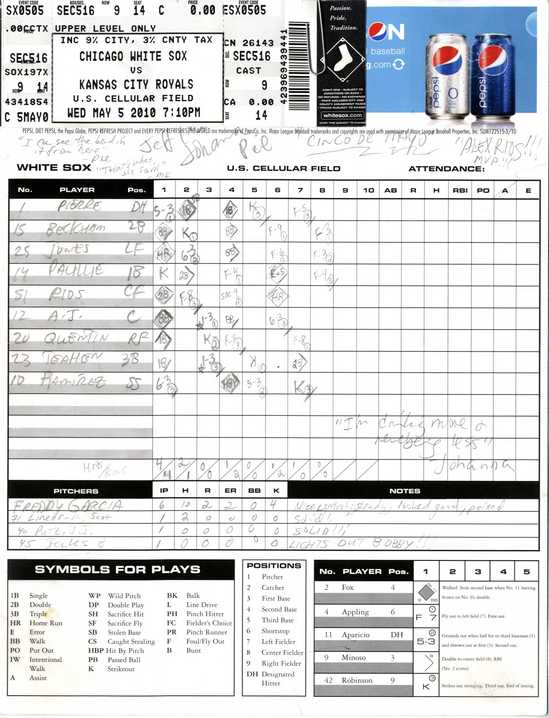 Ahhh… yes… I feel so much better now.