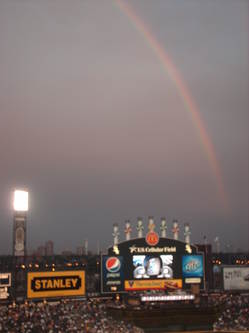 Besides Chinatown flea markets and the out-of-this-world chili at Ramova Grill, the best part about living on the Southside of Chicago is having the White Sox play in my own backyard.

Because as a Cardinals fan far removed from my old Busch Stadium stomping grounds, I know I can always find good, learned, baseball-lovin’ folk at New Comiskey (only newbies and yuppies call it The Cell — so I’m told).

And on Monday night, Southsiders came out to the park in droves.  It was hot.  It was humid.  The rain was coming down hard.  But Mark Buehrle was on the mound and it’s no secret that White Sox fans love them some Mark Buehrle.  Over 36,000 people came out to see him duel the Royals’ Brian Bannister… yes, 36,000!  On a Monday night.  With an hour long rain delayed start.  Against the Royals.

Now that, dear readers, is some serious dedication.

Perhaps the influx of fans was due to the high hopes of a pitcher’s duel.

‘Cuz when Yuniesky Betancourt goes yard, you know the pitching ain’t so great.

Indeed, it was a back and forth battle throughout, until the Sox broke it open in the 7th inning and appeared to have the game in hand.

But Scott Linebrink seemed focused on tempting the Royals’ scouts, who seem to go after the poorest of performers.  Yes, Linebrink’s Kyle Farnsworth impression was brilliantly played by blowing a 3 run lead in the 8th on a Mike Jacobs rocket launch over the right field wall.

Not so fast.  Alex Rios walked to start the bottom of the 8th.  Scott Podsednik continued his 2005 renaissance with a go-ahead run-scoring double… and then later Ozzie Guillen brought in the Fat Man to seal the deal.

Sure, it was a great game and all… but the whole time I couldn’t take my eyes off the guy sitting in front of me: 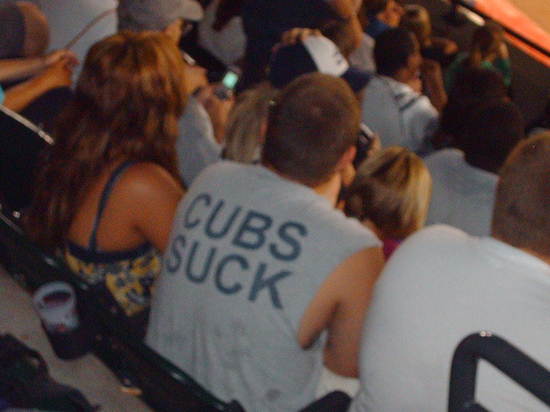